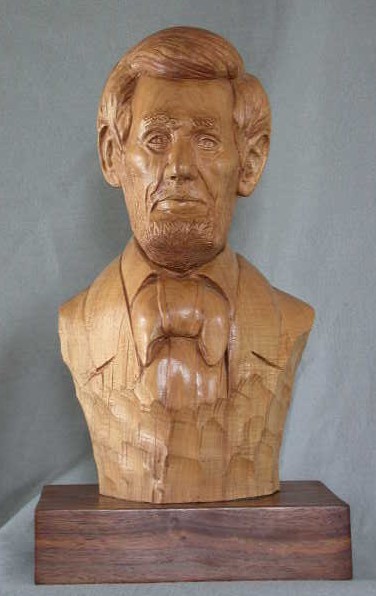 More has been written about Lincoln than any other figure in American history and his visage has been the subject of innumerable works of art. Most artists depict the tired and wasted Lincoln of 1865 and then caricature that visage to look even more wasted than he really was. I suppose the reason for depicting him in such a way is to emphasize the great weight of the responsibilities he had to bear.

As for my portrait bust of Lincoln, I tried to portray him as he might have looked during a moment of satisfaction, such as one of the many times he succeeded in thinking circles around one of the several cabinet members who thought themselves to be superior to him intellectually.

In the many photographs of Lincoln, the great depth of his character showed through his very expressive features in multiple ways. It was easy enough to make a recognizable Lincoln sculpture, but there's no end to the different sculptural possibilities of this one man's visage.

Abraham Lincoln On Line is the best link I could find for information about Lincoln.