Jacques et la Canne a Sucre; A Cajun Jack and the Beanstalk

This is the cover for the book Jacques et la Canne a Sucre; A Cajun Jack and the Beanstalk, by Sheila Hebert-Collins. It came out September 2004, published by Pelican Publishing Company.

I was contacted by Pelican Publishing Company to illustrate Jacques et la Canne a Sucre in April 2003. The editor said I would be their "vine illustrator", after my artwork work on Kudzu Chaos. With a grin, I said : "I am getting into a very, very narrow "niche" market for my illustrations!"

After getting the manuscript, I immediately began to search for information on sugar cane. With a chance meeting with Dr. Barry Sims of the Highland Rim Experiment Station of University of Tennessee, and his referral to Dr. Jim Griffin of LSU Ag Center in Louisiana, I gained a quick but through coaching on sugar cane growth patterns. Armed with this information, I started to work on my sketches for "magical" sugarcane. After the usual round of submitted sketches, redraws and approvals I began on the artwork in September and mailed of the finished artwork December 2003.

This classic story is changed from the usual European setting to the Cajun bayou, the mother's meager income derived from crawfish, and the "magic beans" are now sugar cane cuttings. 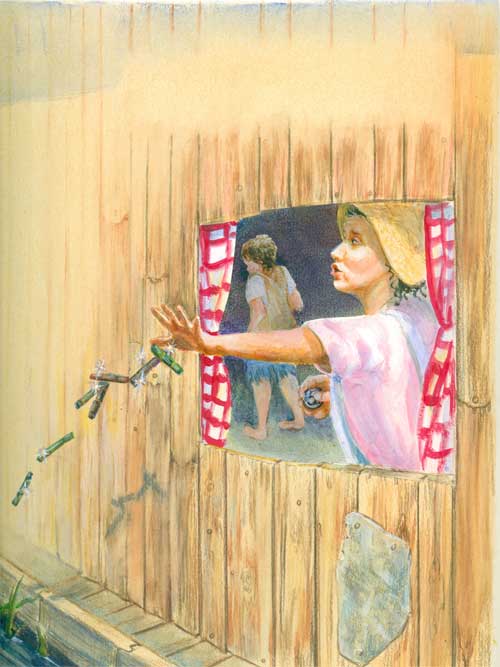 These sugar cane cuttings, after being thrown in the swamp, grow overnight to a height that "reaches the clouds". 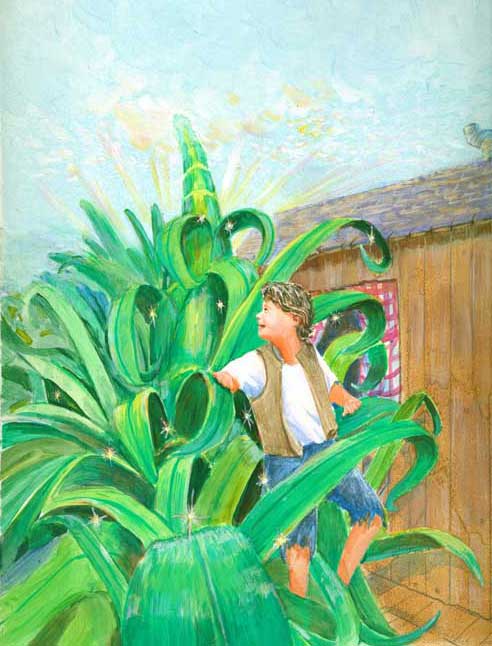 When Jacques climbs the sugar cane he finds at the top, a rich giant's plantation house. This giant of course has the usual magical things, in this case a chicken that lays golden eggs, along with a self-playing fiddle.

These illustrations challenged me to find fresh ways to interpret a very old story. For the cover I went with a bird's eye view of Jacques climbing an electric green sugar cane. And to contrast young Jacques' Cajun dark haired good looks, I used a blond Regency hair styled "giant" with the British colors of red and gold in his dandy's striped vest. When it came time to draw the giant's fall to earth, I felt pretty good about the giant's flailing limbs, but hadn't gotten just right the "splash" of the giant's hitting the watery bayou. But with help from Frank's digital camera, and a stone thrown in our pond I was able to make a grand finish to the story.

It was a neat project to work through as I was able to combine the "time period" of the Jacques and the Beanstalk telling of the tale (1930's) with the much older setting in the clouds of the giant's house, a 1800 rich sugar cane plantation owner. I think it's fun to throw in a little history, whenever possible!

The artwork was done on bristol board, with acrylic glazes, colored watercolor pencils, and a bit of gouche. The clear effect of the acrylic glazing enabled me to get the "electric green" of the magic beanstalk without being too garish. I enjoyed being able to use the glazing technique to it's fullest on a few of the pages, and go all the way to a rich dark blue/black. It was a great contrast to the light colors of the Louisiana and cloud landscapes.