This is the cover artwork for Little Things Aren't Little When You're Little written by Mark Burrows, published by Pelican Publishing Company, in September 2013. 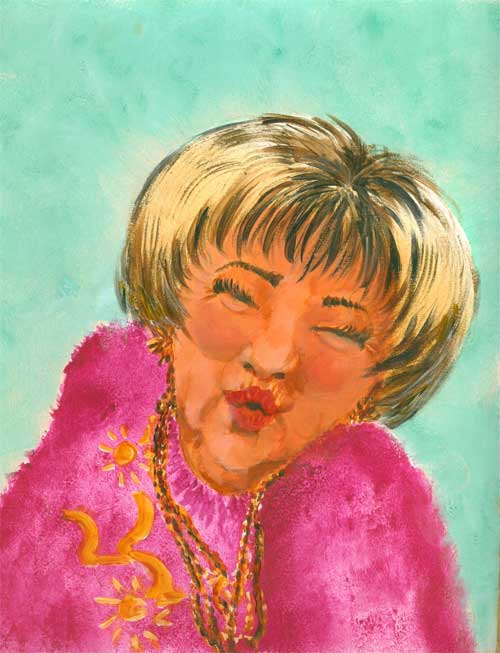 This page had to do with “just a little kiss” from the little boy's Aunt Matilda. I immediately envisioned her as someone who would say that they just wanted a “little kiss” but who would insist on giving a “larger than life” kind of kiss. I drew her with a pouffy bright sweater and lots of jangly gold jewelry. The next page shows just how her nephew really feels about that kiss!

The double page spread below is actually the first sketch I did and was the first painting I did for the book. The text refers to “just a little off the top”, and I immediately envisioned a young curly haired boy being taken by his grandpa into an old fashioned barber shop for his first hair cut. He sits in a BIG chair and is swathed in a cover to protect his clothes. While he is squirming around, the barber tries to snip a “little off the top” but accidentally overdoes it and leaves the little boy with as little on the top of his head as his grandpa!

I painted the illustrations from sketches I had done and that been approved by the publisher. Since my “inside the story” illustrations featured six school children at the “Little Academy” (Ms. Petite Little, School mistress.....inside joke: ”petite” is French for little!) I did character sketches for each of the children. Here is a character sketch page for the little red haired boy in the “little off the top” illustration above, and a little girl that starts off the book with an encounter with a “little” puppy.

This is an engaging read for “Little” children,with their big parents, and most especially for anyone who has felt that Little Things Aren't Little When You're Little!